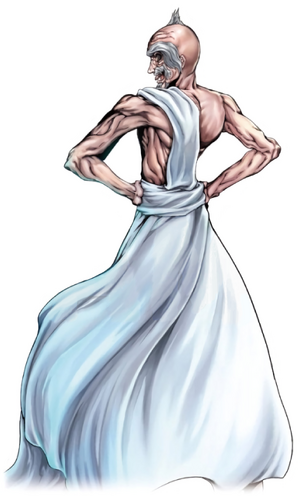 Zeus (ゼウス, Zeusu) is the Supreme God and the Chairman of the Council of Valhalla, he is also the God Father Of Cosmos (G.F.O.C), and the strongest God.

He is the winner of the second round of Ragnarok from the God's Side, facing off against Humanity's Champion, Adam.

A very old man of low stature with sunken eyes. He has a small tuft of spiky hair with thick eyebrows and a goatee. He can also transform into a very muscular version of himself, and furthermore can compress his muscles to the extremes at will, which makes him shrink in size but retains his height this state is referred to as Diamond form (Adamas).

Zeus was portrayed to be a very gentle elder. He has been shown to be very prideful which can be seen when he violently twists a dragon's maw with one arm and destroys the Parliament with a small mallet. However, it is then revealed that he is truly a battle loving pervert. He seems to be interested in knowing that the Valkyries betrayed the gods.

Zeus tends to have emotional outbursts when something amuses him or excites him at the same time. He's usually seen smiling whenever he goes to battle and would do anything he wants to fight the opponent, even if it means threatening to kill other gods who would get in his way. Hermes stated that he was also the most shameless god of them all. He can be seen as eccentric and conceited with himself as declared himself as the "God Father of Cosmos". Despite his eccentricities, Zeus is the strongest and most dangerous god that had ever lived that can intimidate anyone in front of his presence.

When humanity's warrior, Kojiro Sasaki killed his older brother, Poseidon, he was shocked and silently angry on how a god can be killed by a human. During his meeting with Ares, Hermes, Shiva, and Loki, he was more focused on the fights in Ragnarok. When Loki mentioned that his older brother, Poseidon was killed, Zeus told him that he believes that those who fight and survive the battle are stronger than their enemies. He stopped underestimating humanity and took every fight seriously. Zeus and his sons behind him were actually angry that they were humiliated by humanity when Poseidon was killed by them. He requests to Shiva to let a god from the Greek Pantheon fight for the fourth round to avenge their humiliation as the latter accepted.

As the fourth round began, he seriously watched the fight and did not show his usual outbursts. He also showed great faith in his adopted son Hercules stating that losing a lim is no reason to believe that his son would lose.

He fought and killed his father Kronos during the Titanomachy

Also, he was aware of His brother's Adamas betrayal but decided not to do anything since he found it interesting. Hermes spread the rumor of a traitor among the Greek Gods, but the traitor Adamas was already killed by Poseidon. Zeus who heard of it found it amusing and was eager to start a war to find the traitor.

Zeus was in charge of the Gods council as their chairman discussing whether or not to wipe out humanity. All of the gods agree, but Brunhilde was the only one who objected and pointed out a clause to give humanity a fighting chance. All of the gods opposed Brunhilde's idea of Ragnarok until she insulted their pride. Zeus killed his pet dragon next to him and use his gavel to destroy the majority of the floor to start off Ragnarok.

During the first round of Ragnarok, Zeus was watching the fight between Thor and Lu Bu and became amused and excited on how can peak humans give them a good fight. When Thor killed Lu Bu and his followers along with Randgriz, he wanted to fight for the second round.

When it was Shiva's turn to fight for the second round, Zeus appeared before him and threatened to kill Shiva to give him his turn to fight in the second battle against Adam. Shiva was unyielding for a while until Zeus's intent to kill overwhelmed Shiva a little. Shiva reluctantly conceded the second round to Zeus and told him that he owed him a favor. Zeus happily skipped to the stage with Hermes to give off his introduction.

As the second round began, Zeus began to extremely enhance his muscles and became bigger and taller than Adam. Zeus started off his attack against Adam with Meteor Jab, but Adam uses The Eyes of the Lord to look at Zeus's movements and dodges them. Zeus then uses Divine Axe to cut Adam in half, Adam still dodges the attack by jumping and performing a front flip. Adam then starts to attack Zeus with the same moves he used on him leaving Zeus with some minors bruises. Zeus starts to enjoy the battle and becomes excited in a creepy way that unnerved the audience. He then performs a blow that surpasses time itself on Adam, but Adam uses his eyes to instantly copy his technique and quickly uses it against him. The blow twisted Zeus's neck to the back. Just as Zeus fell to the ground, he got back up to silence Heimdall with a finger and rearranged his neck back to his body. Zeus' interest towards Adam became piqued and asked Adam's reason for fighting. Adam replied that he's doing this to protect humanity as its father. Zeus reluctantly uses his secret technique and final form Adamas against Adam. Zeus' final form intimidated the audience of humans and gods that it can lead them to shiver in terror. Adam had to put his guard up against Zeus as they continue their fistfight. Adam continues to use the Eyes of the Lord which Zeus decided to exploit causing Adam to bleed from his eyes and go blind. Adam and Zeus continues their fight of attrition until Adam succumbed to his wounds and died standing with a smile when he brought Zeus down on his knees. Zeus respects Adam as a warrior and praised him for his endurance is greater than his. Adam starts to fade into nothingness along with Reginleif as she reaches out to him smiling as they die. All that is left of Adam was his leaf as Heimdall announce Zeus as the victor of the second round.

During the third round, Zeus was resting his wounds against Adam as he instinctively felt on how Poseidon was killed by Kojiro Sasaki. He was silently angry about how a god can be permanently killed by a human in Ragnarok.

He was later drinking tea calmly with Ares, Hermes, Loki, and Shiva after the third round. Zeus asked Shiva on he finally regain focus until he angrily slammed the table for Zeus being nonchalant in front of him. Loki pointed out how his older brother, Poseidon was butchered by Kojiro Sasaki. Zeus stated that Kojiro was stronger than Poseidon. He started his discussion with his fight against Adam and admitted humans were strong. He deduced on how Brunhilde wants to kill the Gods and discuss how they all should fight for real. Shiva personally volunteers for the fourth round until Zeus requests him to let a God from the Greek pantheon fight for the fourth round to avenge the humiliation of Poseidon's death. Shiva accepted the request calmly and understood their anger as Loki watched their conversation with each other. Zeus sent out Heracles to fight for the fourth round for the god's side to avenge their humiliation from humanity's first victory from the third match. For the fourth round, Zeus was sitting on a couch in the god's audience with Ares and Hermes standing behind him as they watch the fight.

Zeus was watching how Jack the Ripper was using hit and run attacks against Heracles. The running ended when Heracles broke Jack's giant scissors. Jack the Ripper was shown backed against the wall facing Heracles, who is ready to end the fight with his final swing. Jack in his desperation pulls knives from his pouch and throws them at Heracles to halt his onslaught. Heracles reminds Jack that mortal weapons cannot harm a god of his caliber but much to his (Except Jack) surprise, Heracles is wounded by the attack, now bleeding from several knives sticking in his body. Jack the Ripper then reveals that he had lied to Heracles earlier in saying that the scissors were his Volund. Jack the Ripper pulls out a string of knives from his pouch and explains to Heracles that his Volund is actually a "Regalia Generating Pouch". He explains the purpose of his pouch to Heracles and the audience on how it can produce any weapon that can fit inside of the pouch itself. He also explains as the gentleman he is, he uses custom-made weapons that can indeed wound a god. He then shows a smile of complete malice as he tells the wounded Heracles to grovel in fear at his true power.

After Hercules arm was cut off and Ares was falling into despair Zeus punched his son for giving up before Hercules stating that losing a limb doesn't mean Hercules would lose and that he is that kind of a man.

Zeus is the strongest god, the champion of the Titanomachy Tournament, and he managed to attain victory against Adam, who was considered to be humanity's "Trump Card" against the gods by Brunhilde Without his divine weapon. Geir calls Zeus the God's side "Last Boss", Zeus also seems to be feared by the gods as the Supreme God, as shown when he scared even Shiva, a God of destruction.

Godly Strength: He can turn himself into an extremely muscular version of himself. His strength is proven when he kills a dragon by violently twisting its maw with one arm.

Godly Speed & Reflexes: In his muscular form, he can easily launch massive punch with extreme speed toward his enemies. His strongest blow can even surpass the time itself.

Godly Durability: As a god, he was able to endure Adam's barrage of attacks and even in the time when Adam punched his face so hard that it twisted and went in the wrong direction, he was still able to continue the fight.

Divine Axe: A powerful leg sweep that can cut off the body and the surroundings with pure destruction.

Adamas: A state where all of his muscle compress to the full extent. In this state, his body is indestructible just like the name suggests (Adamas means diamond and indestructible in Greek). In this form, even a normal movement of Zeus could become a malevolent attack due to the compression of muscle. However, his body is also self-destructive in this state. If he isn't careful or stays in a long period of time in this form, Zeus can end up destroying himself and die. This form is considered as his last resort and his ultimate technique.

Retrieved from "https://shuumatsu-no-valkyrie.fandom.com/wiki/Zeus?oldid=3033"
Community content is available under CC-BY-SA unless otherwise noted.