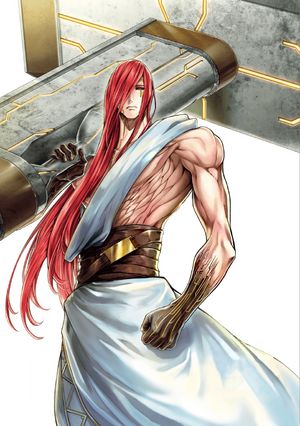 Thor (トール, Tōru) is the Nordic God of Thunder and regarded as the "Strongest Nordic God". He wields the hammer Mjölnir.

He is the victor of the first round of Ragnarok, serving as Gods' Vanguard; he defeated and brutally killed the Humanity's Vanguard, Lu Bu.

Thor has long, red hair which goes past his waist, yellow eyes with black sclera, and a highly muscular build.

Similar to Lu Bu, Thor is a battle maniac and takes great interest in fighting; especially with strong and/or worthy opponents. He often does not show this and has a more stoic and aloof expression on his face for most of the time, making him seem unapproachable to others.

In the ancient era of Asgard, giants of Jotunheim launched an offensive attack, with an army larger than anything they seen before invaded Asgard. The warriors of Asgard had become overconfident for centuries as their battle experience had dwindled until their defense had waned. Asgard had been brought to the edge of destruction as many warriors and citizens were killed and eaten by the giants. Forseti was in the castle in despair from the giants massacre as he was looking for a place to hide with other Asgardians. Thor appearred before them and headed out to battle with Mjolnir to wipe out the entire army of 66 Jotunn himself while finding it all as boring. Forseti and the remaining survivors who witnessed Thor's strength praised and cheered Thor for killing the enemy invaders and told tales of his glory to the other gods.

He fought and defeated Lu Bu in the first round of Ragnarok.

During the third round, Thor was resting his wounds against Lu Bu as he watched how Poseidon was killed by Kojiro Sasaki

Thor is regarded as the "Strongest Nordic God".

Godly Strength - Thor possesses unfathomable physical strength and power which allows him to be able to wield his hammer, Mjölnir, one-handed without difficulty and even take on an army of 66 Jötunn by himself as well as kill the "World Serpent" Jörmungandr with proper technique.

Electrokinesis - Thor displays this ability during his fight with Lu Bu as he coats his left forearm in electricity before latching onto his hammer in preparation for his signature move.

Thor's Hammer: Thor's signature move and instant kill technique. Thor arches his back downwards making it seem as if he is falling and stays in that position, frozen, until he unleashes a swift blow with great force. He used this against the Jötunn back in the Ancient Era and once again on Lu Bu.

Geirröd: The "Ultimate Killing Blow", Thor flings Mjolnir into the air with all of his might and retrieves it, adding on great velocity and centrifugal force to it and finally slams it down upon his opponent. It was first used against Jörmungandr.

Geirröd Thor's Hammer: Thor combined his two most powerful technique to form this ultimate attack. He used this technique to destroy Lu Bu alongside his strongest move Sky Eater.

Retrieved from "https://shuumatsu-no-valkyrie.fandom.com/wiki/Thor?oldid=2953"
Community content is available under CC-BY-SA unless otherwise noted.