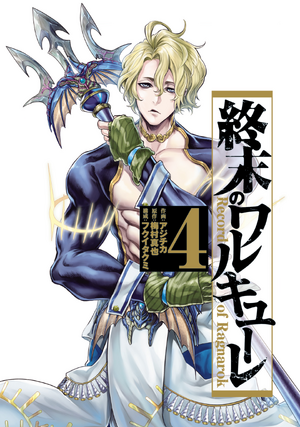 Poseidon (ポセイドン, Poseidon) is the Greek God of the Sea and the third fighter in Ragnarok for the Gods side.

He was the most fearsome among all the gods and first of the gods to fall. Poseidon constantly looks down on many things from humans to fellow gods. Poseidon fought with all his might against Kojiro Sasaki as he continued to look down on him. However, Kojiro uses the third round as a chance to evolve his swordsmanship further. Kojiro succeeded and killed the most fearsome god of all by cutting him into pieces.

Poseidon is a rather handsome god that keeps his face void of emotions. He has blond hair, blue eyes, and pale skin. He is seen wearing extravagant battle armor and carries an intricately detailed trident around with him.

Poseidon is a fearsome, cold-hearted god. This is shown where the only time he ever looked at his older brother Adamas, is when he's about to kill him mercilessly. Like the other gods, he despises humanity and considers them nothing but filth before his eyes.

His hate extends past humans to the other gods. When he first arrived in the arena, he referred to both gods and humans as filth. This hate can be seen again where he glared at the gods who praised him during his fight against Sasaki.

For unknown reasons, he has a habit of whistling before fighting.

He believes that gods are perfect beings and that they have no need for things that humans need: supporters, schemes, an army, etc. This can be seen when he mocked Adamas for soiling his perfect ideal.

At the end of his life, Poseidon was shocked that he was killed by a human and angrily curses Kojiro Sasaki for killing him.

Long before Ragnarok, Poseidon was born as the third brother of the oldest Greek Gods. He appeared cold-hearted and apathetic from birth, paying no heed to his older sibling Adamas, much to Adamas's chagrin. When Adamas attempted to overthrow Zeus, Poseidon effortlessly slew him and erased his memory from history. Hermes, who witnessed the incident, started a rumor that there was a traitor among the Greek Gods. Only a handful of gods know about the incident and why Adamas was removed from history.

Poseidon makes his debut in the third round, fighting humanity's strongest swordsman; Kojiro Sasaki. In a short time during a match, Kojiro was scanning Poseidon's movements and techniques before he started his attack. Kojiro then sits down in front of Poseidon thinking that he doesn't want to die while the audience was confused by this action. Kojiro decides to make the first move to attack Poseidon as the latter starts to move and attack. Kojiro kept dodging and countered every attack made by Poseidon while he was scanning him. Poseidon started to whistle and added a little more strength to attack Kojiro, leaving a wound on the left side of the abdomen. Poseidon then mockingly shows emotions of contempt and derisively smiles. When the audience of the God's side started to cheer for him, Poseidon coldly glares at them to shut them up. Kojiro wondered why he doesn't accept the support he is receiving, Poseidon responded that they are entirely unnecessary to those who have already attained perfection. They then resume their fight as Poseidon jumps in the air to attacks Kojiro on the ring.

The fight drags on as Kojiro continues to scan him and Poseidon increasing more of his power into his attacks. Kojiro's blade was then broken in half by Poseidon and stopped his attack. Kojiro then picks up the broken half of the blade with his other hand as it turns into another sword. Kojiro now wielding two swords continues his fight as Poseidon still looks down on him. As the fight continues Kojiro uses the techniques of the swordsman he fought against leaving Poseidon covered in wounds. Poseidon starts to whistle again while showing emotions of contempt as he decides to use his full strength against Kojiro. In the face of Kojiro's masterful techniques, Poseidon was only interested in turning the battle into one of pure strength. Kojiro was starting to get pushed back until all of his fellow swordsmen that he fought and humanity encouraged him to not give up and win by performing a forward sword slash. Kojiro still continued to fight against Poseidon as his scanning ability evolved further to scan all of creation at once. Kojiro was now able to steal the technique of the gods and reached close to Poseidon. Kojiro overcame Poseidon attacks by using Swallow Tiger Combo, Thousand Blades. Kojiro then cut off Poseidon spearhead of his trident and his right arm, but Poseidon still continues to use his broken trident with his other arm until it was also cut off. Having only his mouth left, Poseidon furiously bites onto his spearhead and tries to kill Kojiro. However, Kojiro had already surpassed Poseidon and kills him by cutting him down with x-mark slashes on his chest with his swords. Poseidon was in disbelief on how a human can kill a perfect god-like him. He angrily curses Kojiro for killing him as he falls dead on his back into pieces. The gods were shocked and angry about how a human can actually kill a god as they watch Poseidon fade away into nothingness.

Zeus was later drinking tea calmly with Ares, Hermes, Loki, and Shiva after the third round. Zeus asked Shiva on he finally regain focus until he angrily slammed the table for Zeus being nonchalant in front of him. Loki pointed out how his older brother, Poseidon was butchered by Kojiro Sasaki. Zeus stated that Kojiro was stronger than Poseidon. He started his discussion with his fight against Adam and admitted humans were strong. He deduced on how Brunhilde wants to kill the gods and discussed on how they all should fight for real. Shiva personally volunteers for the fourth round until Zeus requests him to let a God from the Greek side fight for the fourth round to avenge the humiliation of Poseidon's death. Shiva accepted the request calmly and understood their anger as Loki watched their conversation with each other. Zeus sent out Heracles to fight for the fourth round for the god's side to avenge their humiliation from humanity's first victory from the third match.

Poseidon is considered to be the most fearsome among all the gods. Even other gods are afraid of possibly invoking his wrath this statement alone already speaks the volume of Poseidon's power.

The extent of Poseidon's power is still largely unknown but he can be definitely assumed to be very powerful even amongst the gods, as he was able to easily kill his older brother, the "God of Conquest" Adamas in a single hit. According to the "God of War" Ares, Adamas is a powerful god on his own right and still can't believe how Poseidon easily took him out in one hit. However, it can be believed that he is a powerful god as he was referred to as Zeus Enalios or Zeus of the Ocean.

Retrieved from "https://shuumatsu-no-valkyrie.fandom.com/wiki/Poseidon?oldid=3028"
Community content is available under CC-BY-SA unless otherwise noted.